On the Dedication of the New Vassar Temple Building in 1953

“And let them make Me a sanctuary, that I may dwell among them.”
—Exodus XXV-8 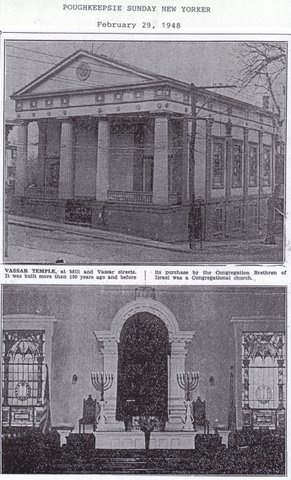 The words above are found on the inside cover of the program of the Ceremony of Laying the Corner Stone for our present building. This ceremony was held on Sunday, April 26, 1953. The event was a very special and regal affair. The Jewish War veterans of Herman Siegal Post 625 presented the Colors. This was followed by the singing of the Star Spangled Banner by the Jewish Chapel Choir of the U.S. Military Academy from West Point. Rabbi Erwin Zimet provided the invocation. The president of Vassar Temple, Larry Edell greeted the many dignitaries, members and guests who were in attendance that afternoon. Rabbi Alton Winters, the temple’s then Rabbi provided the prayer of consecration. There were other musical selections, speeches and prayers that afternoon. It was a very profound moment in the history of Vassar Temple.

The 106 year old congregation had been preparing for the event for many years. The Poughkeepsie Eagle carried the Incorporation news and certification in a March 1848 edition. At that time the Congregation Children of Israel, as it was then called, made its home on the upper floor of a building on Market Street. By 1860, the name of the Congregation had officially been changed to Congregation Brethren of Israel, and was making its spiritual home at a newly procured building on Vassar and Mill Streets. It had been purchased from the First Congregational Church and after some remodeling it was ready for the High Holiday services in 1860. Matthew Vassar, Jr. held a mortgage for the building for $3,000. Shortly after the move to the new building, the more familiar name of Vassar Temple came into use. There was a simultaneous dedication of the building and installation of the first temple president in 1862.

During the first few years there was a period of dramatic growth from the 16 families who were the initial membership. The children attended Religious School in the basement of the building. Many teas, oneg shabbats and other wonderful events were held in that basement. When the 100th anniversary was held in 1948, Dr. Albert Rosenberg spurred the drive to build a new structure which would meet the changing needs of the Temple. Ground for the new structure was donated by Richard Satz, and an additional piece of land was purchased to extend the property to Underhill Avenue.

On June 12, 1952, first ground was broken to build our Temple. Dr. Jacob Erdreich turned the first spade, followed by Mr. Satz and Mr. George Salberg, the general chairman of the building project. Many fundraising events and meetings were held throughout 1948 and 1952 to fund the building. The contract for building was held by the L. H. Swenson Co. at a proposed cost of $133,000. Of course, this did not cover the costs of the carpets or furnishings in the Sanctuary. There are many inspiring and heartwarming stories of how those of blessed memory found the money to furnish our elegant Sanctuary by nothing short of miracles.

The words of Rabbi Winters spoken the day of the Corner Stone ceremony can inspire us still, “….Future generations may thank us that we have built well and left them a firm structure as a house of prayer, study and assembly. But they will call us a blessing if we make them inheritors of a godly life founded by Thy holy law…”